Mesomorph Pre Workout has held the crown for being one of the top pre workouts since it was first introduced to the fitness world around 2013. If you’ve been a fan of the OG mesomorph and have continued to show it loyalty throughout the years, you know its had a bunch of revisions since then. Even through all the new looks and new formulas, the King of pre workouts has held it’s reign strong. However as a result of the most recent battle for DMAA with the FDA, Mesomorph has been revised again.

As of November 2020,  Mesomorph pre workout has updated its formula. The formula now contains 2-Aminoisoheptane HCl, Geranium Extract (stem & leaves), and Quebracho Blanco Extract. This also resulted in the removal of Senegalia Berlandieri Extract and all the Phenylethylamine Alkaloids, and Isopropylnorsynephrine HCl.

Now let’s get into these changes! 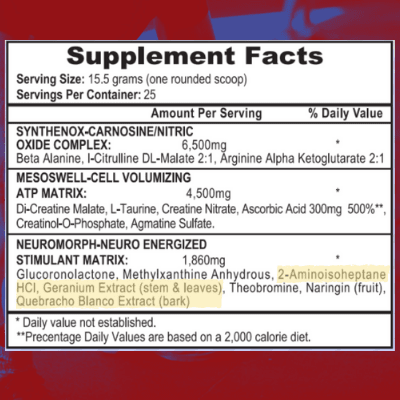 2-Aminoisoheptane of DMHA may help improve performance and increase weight loss as a stimulant. And is commonly compared to that of DMAA. (6) You can read more about DMHA HERE.

The next ingredient may bring false hope, if you didn’t know, Geranium Oil is actually the source of DMAA (7). Unfortunately, seeing this in the formula doesn’t mean DMAA is in the new version of Mesomorph. There is no DMAA in Mesomorph as of November 2020.

So what’s the point of this ingredient? While Geranium Extract is featured in this formula, it’s stripped of the DMAA Alkaloids. So what’s left is a potentially similar, but weaker version. However, we don’t have studies on the effectiveness of this extract like we do of other extract prepared in this manner (ephedra).

The last change is the addition of Quebracho Blanco Extract which may act as vasodilator and aphrodisiac.(8)

Mesomorph isn’t a pre workout for beginners. Despite being a proprietary blend, the formula brings full, clinical dosages of the ingredients. Which is going to deliver the energy, focus, and pumps mesomorph is known for. Below we have the labels for both the old version of mesomorph and the new.

As you can see the only complex that has been changed is the Neuromorph-Neruo Energized Stimulant Matrix. In the older formula this matrix had 1870mg and contained 3,7-Dihydro-3,7-Dimethyl-1H-Purine-2, 6-Dione, and of course Geranaburn or DMAA. 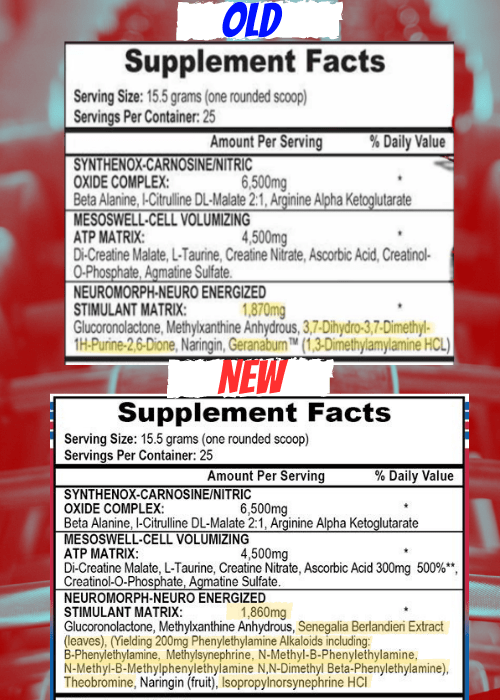 The new version of mesomorph pre workout has 1860 mg of this same matrix, within it there are a few changes. In the new formula there is Senegalia Berlandieri Extract, Phenylethylamine Alkaloids, Theobromine, Isopropylnorsynephrine HCl.  To help understand why these ingredients were chosen for the new formula, we need to know what were the older ingredients and what they did for the formula. 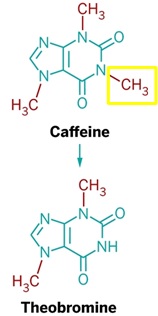 Starting from the beginning of the old label we have the ingredient 3,7-Dihydro-3,7-Dimethyl-1H-Purine-2, 6-Dione. This is actually just another name for Theobromine, so its technically not a change to the formula. Theobromine is a xanthine alkaloid that is used as a bronchodilator and as a vasodilator derived from Theobroma, the genus of the cacao tree.

It is the primary alkaloid found in cocoa and chocolate, and is one of the causes for chocolate’s mood-elevating effects. Theobromine is closely related to caffeine. However unlike caffeine, theobromine has an additional methyl group, making it’s effects last longer.

So what type of effects can you expect?

Because theobromine is similar to caffeine, you can expect the energy boost, as well as the mood boosting properties. Theobromine also has appetite suppressant properties which makes it a useful fat burning ingredient. (1)

Geranaburn, 1,3-Dimethylamylamine HCL, DMAA or whatever other name you want to refer to it by, was the main stimulant in the original mesomorph pre workout. DMAA is structurally similar to ephedrine, with the quick energy spike associated with stimulants like caffeine. DMAA boosts dopamine and noradrenaline uptake, while slowing down the re-uptake for your workout. So what DMAA does is produce intense energy, while providing you tunnel like focus, and intense euphoria (via increase Dopamine release in the brain).†

Essentially the only ingredient changed from the previous formula is the DMAA. Because the only changes in the formula were in the stimulant matrix, all these new ingredient are going to be stimulants as well. 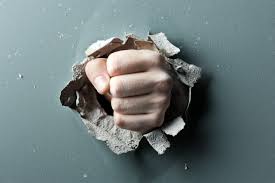 The first intense stimulant shown in the label is Senegalia Berlandieri Extract. It’s going to promote an increase energy, appetite suppression, while also providing a feeling of euphoria.(2) This ingredient is becoming very popular in fat burners because of these properties. Isopropylnorsynephrine HCl is the other intense stimulant in this matrix.†

It’s also known as Octopamine and is another alkaloid found alongside Synephrine in Citrus Aurantium. Aside from boosting energy, octopamine promotes fat burning by inhibiting the uptake of glucose in fat cells (adipocytes) by blocking the beta-3 adrenoceptor. (3)

Phenylethylamine (PEA) and its alkaloids serve a bunch of purposes. PEA is a natural stimulant our brains make. In addition to being necessary to function, PEA also regulates our mood. Like most stimulants PEA produces increased mood, focus, and energy. But what makes PEA special is it’s euphoric feeling.

As seen with theobromine, PEA can be found in natural substances like chocolate. Both Phenylethylamine and theobromine help stimulate the production of endorphins, which is commonly known as your ‘feel-good’ hormone. (4,5)

What Flavors Are Available?

Below we have listed the flavors available…in order of ranking popularity.

What To Expect With Mesomorph?

The energy is still there and we would definitely recommend you assess your tolerance before taking a full scoop. However unlike the version with DMAA, it’s not going to be all at once and then a crash. This version has more of a sustainable energy blend, meaning when you feel it, it’ll last. So far based off of our teams experience Mesomorph pre workout is still the King of Pre workouts.

But lets checkout some customer reviews too…

Despite the changes we see Mesomorph holding onto it’s title and the reviews show that as well! 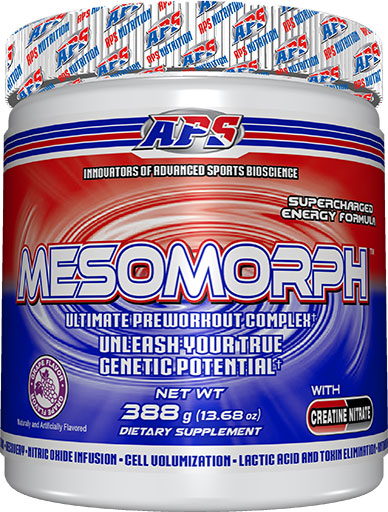